I was saddened to read a message by @Londoncanals on Twitter of plans to redevelop London's Eagle Wharf, losing the historic buildings in favour of something new and trendy. 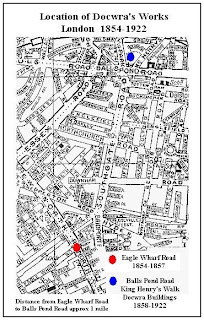 Eagle Wharf has strong Docwra connections, it being almost the birthplace of their civil engineering business in London:

In 1852-3 a Richard Docwra was listed in a London Trade Directory as a water pipe layer and contractor. Between 1854-6 his address was shown as Eagle Wharf Road in London. In 1857 Thomas Docwra is listed at Cowley Wharf, Eagle Wharf Road, and Waltham Cross, Herts.

Eagle Wharf Road is alongside the Regents Canal which links to the Thames at Limehouse basin to the south, and which northwards joins the mail line of the Grand Union Canal at Bull's Bridge junction. Between Eagle Wharf Road and Limehouse Basin is the junction with the Hertford Union Canal which links the Regents Canal and the Lee Navigation (River Lee). From this junction it is only 11 miles up river to Waltham Cross.

By 1858 Thomas Docwra had moved around a mile northwards to Balls Pond Road where the firm (which became Thos Docwra & Son in 1865) stayed until it ceased business in 1922. There are directory entries for Thos Docwra at 114 Balls Pond Road, 1 King Henry's Walk and Docwra's Buildings.
Posted by Anne at 11:19 No comments: